The Pride of the Tribe 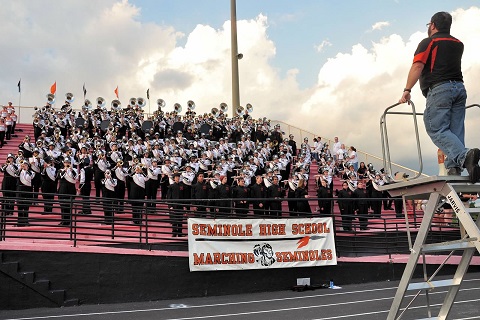 We are the Pride of the Tribe.

We believe in motivation, dedication, discipline.

The Bands of Seminole High School are …

Wind Ensemble
The WIND ENSEMBLE is Seminole High School’s top performing concert band.  Admittance into this class is based on auditions and demands the highest commitment to a performing ensemble. Private study is strongly encouraged. The Wind Ensemble is a class that meets (for credit) each school day and performs at several concerts and festivals each year. Four after school rehearsals will take place in January and February for preparation for district and state concert festival. Students will also be required to perform at the Solo and Ensemble Festival in February.

Symphonic Band
The SYMPHONIC BAND is open to wind and percussion instrumentalists who have achieved a specific level of playing ability. Admittance into this class is based on auditions and demands a high commitment of participation. Private study is highly recommended. The SYMPHONIC BAND is a class that meets (for credit) every school day and performs several concerts and festivals each year. Four after school rehearsals will take place in January and February for preparation for district concert festival.

Concert Band
The CONCERT BAND is a performing ensemble open to all wind and percussion students. The group will perform several concerts during the year and will emphasize the study of basic musicianship skills. The CONCERT BAND class meets every school day (for credit). Opportunities for playing in small groups and solos will also be available. Four after school rehearsals will take place in January and February for preparation for district concert festival.

Percussion Class
The PERCUSSION CLASS is open to students who wish to study percussion instruments in the band department. The class meets every school day for credit. Students will learn basic fundamentals to advance playing skills on a variety of
percussion instruments. During the Fall semester all students work on the marching portion of the band. In the Spring semester many students will transfer into one of the band classes.

The Pride of the Tribe
The “The Pride of the Tribe” is the combined forces of the Wind Ensemble, Symphonic Band, Concert Band, Percussion Class, Dazzlers, and Expressions. The purpose of this organization is to provide entertainment for football games, pep rallies, band festivals, parades, and concerts. It is an integral part of the instrumental music education curriculum at Seminole High School. All members are expected to devote TOTAL DEDICATION and MAXIMUM EFFORT and
INVOLVEMENT in all aspects of marching, playing, and performance.

Want to help support our band?